The squat clump of rock barely qualifies as an island. It is even hard to make it out from the shoreline of Cape Town’s False Bay.

Up close, though, almost every inch of Seal Island is covered by the Cape fur seals that gave it its name. They shuffle clumsily over the bare island, flopping into the bay with each passing swell.
Unsurprisingly, Seal Island has been a virtual fast food outlet for the ocean’s most fearsome apex predator.
“Seal Island is probably the world’s most famous location for seeing great white sharks,” says Chris Fallows, a well-known shark expert, photographer and tour boat operator.
Fallows says the giant great white’s favored prey were young seals making their first, tentative attempts at getting beyond the safety of the island. It was documenting the shark’s hunting technique that made Fallows famous. 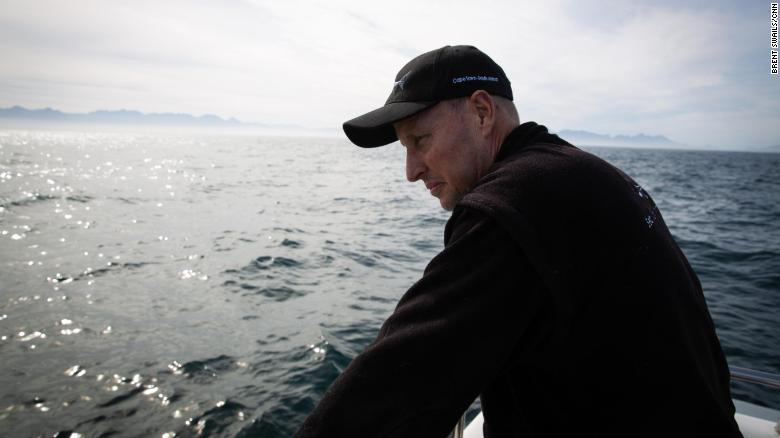 Wildlife photographer and dive operator Chris Fallows.
It’s likely that you have seen Fallows’ incredible images of False Bay’s flying sharks. He discovered their remarkable behavior back in the early 1990s when he snuck a small inflatable boat into the bay, dragging a yellow life jacket off the back.
Almost immediately, he says, a young great white shark breached the water in an aerial attack, tearing the jacket to shreds.
After countless documentaries and Shark Week appearances on the Discovery Channel, in 2019, Fallows is forcing himself to talk about these awesome sharks in the past tense. 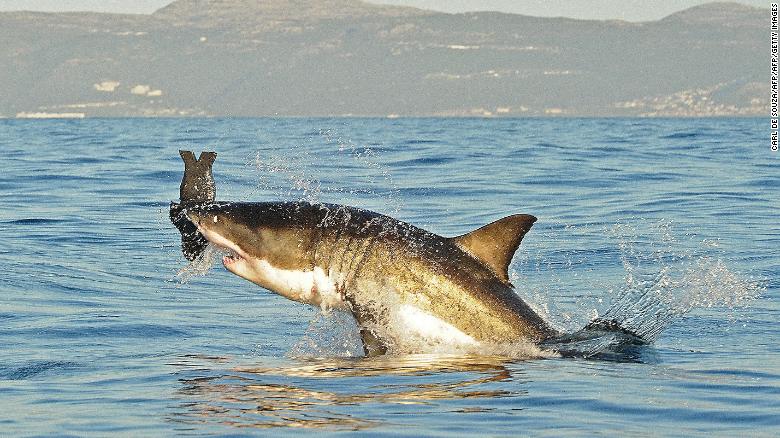 This image from July 2010 shows a great white shark jumping out of the water as it bites an artificial decoy seal near False Bay.

“For me, losing the great white is like losing part of my soul,” he says. “It shaped my life and it has given me some of the greatest highs of my life.”
Back in 2012, Fallows and his team witnessed 47 shark predations in False Bay in a single day. But for more than a year now, nobody here has recorded a great white. Not one.
The great whites of False Bay have vanished.
On the steep hill overlooking the popular Muizenberg surfing beach, Mobwabisi Sikweyiya is bemused. For 15 years he has been eying sharks and warning surfers, part of the well-known Shark Spotters charity.
“They have to come back. They will come back,” he says, sounding unconvinced. “If they don’t come back, then I am going to have to look for another job.” 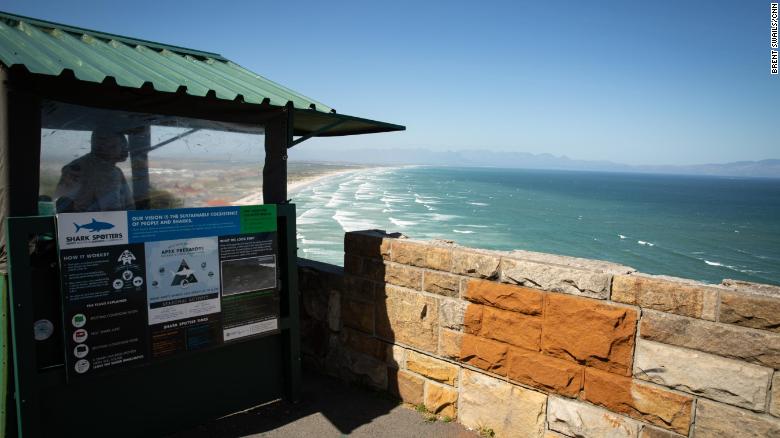 On the cliffs above shark spotters no longer take great white sightings for granted.
Down in the small fishing harbor of Kalk Bay, fishing boat skipper Solomon Solomons’ eyes widen as he remembers his last encounter with a great white.
“It was a year and a half ago, we were fishing by the island and the shark came right past our boat, the guys were like ‘we got to get out of here skipper!'” he says with a laugh.
Read: UK fish and chip shops serve up endangered shark species
Solomons remembers far more great whites as a young man, but he doesn’t know where they have gone.
“There are too many seals now. They are eating all my fish,” he says.
A decline, then a collapse?
The great whites didn’t just disappear overnight. There has been a steady decline, then, most likely, a dramatic collapse says Stellenbosch University marine biologist Sara Andreotti.
“I was probably the least surprised person of all that there are no great whites,” says Andreotti.
Unlike land-based apex predators – animals at the top of the food chain – like lions and leopards in the Kruger Park or, say, wolves in Alaska, great white sharks aren’t that easy to count. Andreotti says that, at times, cage dive operators and fishermen could see the same shark five times and assume they saw five sharks.
But in 2016, Andreotti and a group of colleagues released a groundbreaking paper after years of work estimating South Africa’s great white population. She spent months out at sea jabbing great whites with a long pole affixed with a kind of spear tip that collected small amounts of shark flesh. 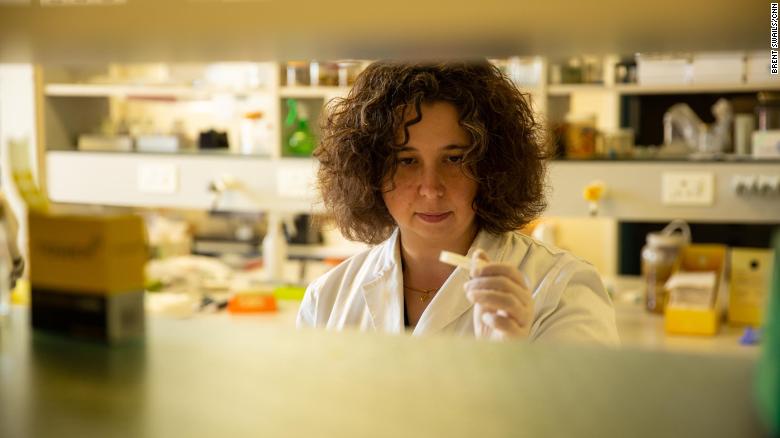 Marine biologist Sara Andreotti in the lab.
The DNA analysis of the shark population, combined with a visual count, revealed numbers that shocked the team. Earlier estimates had put the great white numbers in the low thousands. Andreotti and her colleagues believed that the number, back in 2012 when they collected they collected the data, was just a few hundred.
Their DNA analysis of the shark tissue uncovered two deeply alarming facts.
First, it turns out that the genetic diversity of South Africa whites is exceptionally low, making them more susceptible to external shocks like disease or environmental change. And second, and more immediate danger, based on the genetic testing the breeding population one generation above the sharks sampled was around just 300 individuals.
“To maintain a population, you need more than 500,” says Andreotti.
The report found that 89% of all sharks here had the exact same lineage. That inbreeding has resulted in a species less able to adapt to the changing conditions.
Protected, on paper
But some shark scientists reacted skeptically to Andreotti’s findings and her prediction of population collapse, writing in a rebuttal that the “conclusions drawn cannot be supported by their methods and data.”
Multiple calls, emails and text messages from CNN to press officers and scientists at the Department of Environment, Forestry and Fisheries went unanswered.
“We shouldn’t let an animal that has been on our planet for millions of years go extinct, because we are too busy trying to find excuses rather than acting,” says Andreotti.
Andreotti is now replicating her genetic studies with samples taken from Australia, another well-known population of great whites, to assess the health of that population.
A shark economy
The sharks attracted a steady flow of foreign tourists who wanted to experience shark diving in cages. They brought with them tourist dollars and jobs.
“The great whites of South Africa have probably attracted more attention to this country than the whole suite of our other predators,” says Fallows.
The apex predators are still being seen further up the coastline, but even there the numbers appear to be dropping fast, says Fallows and other cage divers operating in the area that CNN spoke to. 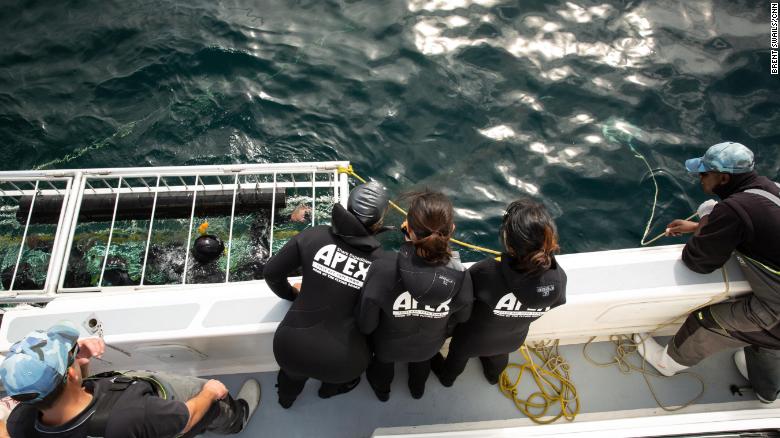 Tourists prepare to cage dive off of Seal Island. It was one of the world’s best places to spot great whites, but now the tourists look at sevengill and other species.
Like everyone else here, Fallows hasn’t seen great white sharks for more than a year, but he still has to make a living. Now he offers cage divers the chance to get close to seven-gill sharks.
These ancient scavenger sharks moved into the depths around Seal Island as soon as the great whites left, says Fallows. “They are the hyenas of the sea,” he says. Not as effective at hunting seals as great whites, but more inquisitive toward the divers in the cage.
Scared off by whales?

There are no definitive answers why the great whites have vanished from False Bay. Their shallow gene pool already made them vulnerable and their breeding numbers were critically low.
Some scientists say that a couple of orcas, or killer whales, scared them off from False Bay. Orcas are known to hunt great whites.
But both Fallows and Andreotti are skeptical: their teams have seen orcas here for years in the bay and it only ever had a temporary effect on great white numbers.
Some have proposed the sharks have just moved away from False Bay — they are known
But again, Andreotti is skeptical. And research has already shown that the South African population have bred very little with whites in Australia or in the Atlantic.
While sharks do enjoy a seal meal, the answer might be with South Africa’s commercial fishing sector. There has been a steady increase in demersal fishing for sharks and rays for consumption as fish and chips in Australia.
Great whites, particularly the young ones, eat smaller sharks rather than seals as their main diet during large parts of the year, and Fallows says there has been a collapse in the populations of some of these shark species. And large sharks are regularly caught accidentally as by-catch by trawlers and line fishing boats off the coast.
After millions of years at the top of the ecosystem, in less than a decade, the great whites are being wiped out by us.
“A lot of people have been ringing alarm bells,” says Fallows. “Unless we really step our efforts to conserve what we have left, South Africa’s once bountiful shores are becoming more and more empty by the day.”

Investment In E-Commerce Space Promotes Growth Of SMEs In Kenya

Mövenpick Hotel & Residences Nairobi welcomes the Christmas Season with a...