Home Business Blogs realme C15 vs Infinix S5, How Do They Compare?

realme C15 is the first 6000mAh smartphone with Quad Camera and a 6.5-inch HD+ LCD display. It is powered by MediaTek Helio G35 processor and it runs on realme UI over Android 10.

With an intuitive design and elegantly fitted bezels, realme C15 is an amazing choice for the budget-phone seeker. Its Quad Camera consists of a 13-megapixel primary lens, 8-megapixel ultra-wide-angle lens, a 2-megapixel macro lens, and a black and white sensor. On the front is an 8-megapixel selfie camera. All these give photo enthusiasts a sense of satisfaction in a mid-range product that has a lot to offer.

This article evaluates the difference between the two phones and is aimed at those trying to choose between realme C15 and Infinix S5.

Why is realme C15 is Better than Infinix S5?

In terms of hands-on user experience, both phones are easy to use; however, Infinix S5 has a slightly bigger screen (6.6-inch) and weighs a bit less. Nonetheless, here is why realme C15 still makes a better choice:

Both phones feature a 4GB RAM and an internal memory of 64GB. However, realme C15 is available in three variants, a 3GB/32GB; 3GB/64GB; and 4GB/64GB. The two smartphones also come with micro SD card slots for those who are looking to expand the storage capacity.

While both realme C15 and Infinix S5 can record videos at 30fps, realme packs another feature in its camera system. It has a wide aperture, which captures more light that enables you to avoid blurs by enabling faster shutter speeds. This sensor also provides a shallow depth of field giving you the prowess of blurring backgrounds as you take pictures.

Where the realme C15 ultimately remains undisputed is the battery performance. It has a massive 6000mAh battery indicating a longer life and a fast charge of 18W! With this kind of power, you can carry out a ton of activities without ever worrying about your battery running flat.

That said, here is a full comparison of realme C15 and Infinix S5.

So, which one do we recommend you buy?

Between the two, we recommend the realme C15. It is easy to hold, offers a nice grip, has a longer battery life, has a better processing capability, and is highly affordable. 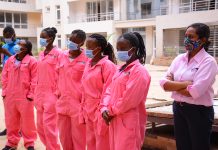