Wrestling enthusiasts in Africa have a thing to smile about as World Wrestling Entertainment (WWE) and continent’s premier sport channels provider, SuperSport, have today announced a new multi-year agreement to broadcast WWE programming live for the first time in more than 50 countries in sub-Saharan Africa.

Starting August 28, this year, DStv and GOtv customers will have access to the world’s biggest wrestling entertainment when SuperSport airs WWE’s flagship shows Raw and SmackDown, as well as WWE specials such as WrestleMania and SummerSlam.“WWE is a global phenomenon, so securing the broadcast rights for SuperSport is a terrific coup. The athletes involved are larger than life figures who command huge followings. At long last our DStv and GOtv viewers will get to share in this entertainment spectacle in high definition. I look forward to a long and fruitful partnership with WWE,” said SuperSport Chief Executive officer Gideon Khobane. 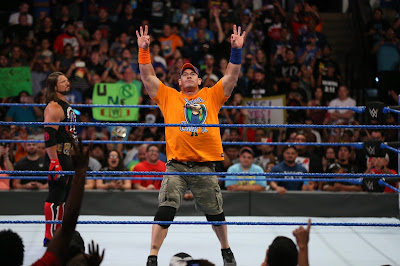 DStv Premium, Compact+ and Compact customers will enjoy their wrestling drama live while DStv Family and Access will also enjoy same-day rebroadcast of the events which will be available on SuperSport channels S7, S9 and SS10. Viewers can look forward to Raw on Tuesdays and SmackDown on Wednesdays offering both live telecasts and same-day re-airs, as well as all WWE specials live, including WrestleMania, SummerSlam, Survivor Series and Royal Rumble. GOtv viewers will have access to the wrestling action on Select 3, available to GOtv Plus customers.

“SuperSport is a best-in-class partner who shares our vision and passion for engaging with and entertaining our fans. Televising WWE programming live in sub-Saharan Africa for the first time an important milestone for us, and we look forward to working with SuperSport to cultivate new fans in the region,” said WWE Executive Vice President, International, Ed Wells.

“We’re delighted to bring our DStv and GOtv customers yet another sport that’s going to keep them glued to their TV and mobile screens. This addition to our sports offering will certainly bring more value for our customers and ensure that SuperSport remains their go-to World of Champion and home to the world’s biggest sports. This is part of our ongoing efforts to ensure that our platforms deliver only the best entertainment to our customers,” said MultiChoice East Africa Regional Director, Stephen Isaboke.

All programs will be available with English commentary and on demand. To celebrate the new partnership, SuperSport will televise the prior week’s episodes of Raw and SmackDown on Monday, August 28.

Naomi Osaka Withdraws from The French Open Due To Anxiety, Depression

How To Become a Climate Champion with Cartoon Network

BM Foundation call for action to conserve the environment